A triumph of failed ideas: European models of capitalism in the crisis 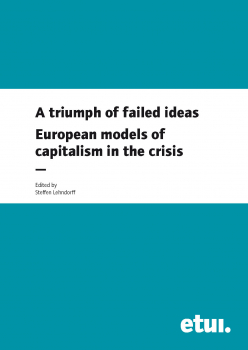 The current crisis in Europe is being labelled, in mainstream media and politics, as a ‘public debt crisis’. The present book draws a markedly different picture. What is happening now is rooted, in a variety of different ways, in the destabilisation of national models of capitalism due to the predominance of neoliberalism since the demise of the post-war ‘golden age’. Ten country analyses provide insights into national ways of coping – or failing to cope – with the ongoing crisis. They reveal the extent to which the respective socio-economic development models are unsustainable, either for the country in question, or for other countries.

The bottom-line of the book is twofold. First, there will be no European reform agenda at all unless each country does its own homework. Second, and equally urgent, is a new European reform agenda without which alternative approaches in individual countries will inevitably be suffocated. This message, delivered by the country chapters, is underscored by more general chapters on the prospects of trade union policy in Europe and on current austerity policies and how they interact with the new approaches to economic governance at the EU level. These insights are aimed at providing a better understanding across borders at a time when European rhetoric is being used as a smokescreen for national egoism.

The book has also been published in German by VSA Verlag, please find here more information.

Chapter 1: Dominique Anxo: From one crisis to another: the Swedish model in turbulent times revisited

Chapter 3: James Wickham: After the party’s over: the Irish employment model and the paradoxes of non-learning

Chapter 4: Steffen Lehndorff: German capitalism and the European crisis: part of the solution or part of the problem?

Chapter 6: Christoph Hermann and Jörg Flecker: The Austrian model and the financial and economic crisis

Divisive integration. The triumph of failed ideas in Europe - revisited

This book is a follow-up to the ETUI 2012 volume 'The triumph of failed ideas'. The focus of the book is the weight attributed to the different economic and social development paths in ten individual EU countries, and their interaction with the austerity regime established at EU level which in fact is deepening the crisis rather than paving ways... Find out more