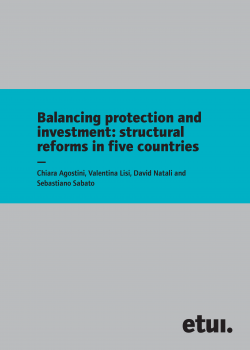 Structural reforms are increasingly at the core of the European and national agenda. But what are they? And what are the main factors shaping their content? This analysis of the structural reforms adopted between 2008 and 2015 in five European Union (EU) countries – the Czech Republic, Finland, Germany, Ireland and Italy – addresses these two questions.

Adopting a clear definition of structural reforms, the book proposes a new typology of structural reform strategies by examining developments in five policy areas and classifying them according to whether the focus is on social protection and/or investment. An analysis of these five countries shows how a combination of EU constraints and opportunities, domestic path dependency and political dynamics has resulted in different structural reform trends; while some countries have experienced an overall devaluation in social standards (e.g. Ireland), others have pursued more mixed strategies. What is more, there have been different phases of structural reform patterns. After a first period of anticyclical measures, austerity dominated between 2011 and 2013. In more recent years, many countries have followed a more pro-growth strategy.

The book provides evidence that the EU influenced structural reforms but lacked a coherent agenda to support growth. In such a context, different countries implemented different reform strategies that reflected their (partly) diverging socio-economic models.

1. The interpretative grid: the crisis, domestic factors and the EU’s leverage