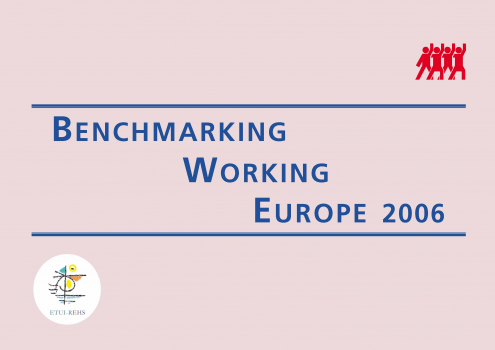 The European social model under pressure

This sixth edition of Benchmarking Working Europe documents some of the current problems the European social model is facing, including problems on European labour markets, social inequalities, initiatives to reduce workers' rights and European policy deficits. The report calls for a new policy mix of employment-friendly macroeconomic policies and active labour market and social policies against a background characterised by - as also described here - sluggish growth, unimpressive productivity gains and a lack of job creation in Europe, among other things. The key aims must be to counteract high unemployment and address social problems, skills shortages and demographic challenges. The data-driven report thus points in the direction of a conclusion that, if European societies are to remain competitive and socially balanced, a future-oriented European social model must be guaranteed and further developed.

'There is no trade-off between economic growth and social reforms. Social reforms must be an important part of developing modern and more knowledge-based European societies' states John Monks, General Secretary of the ETUC.

The EU has so far been a positive force, enshrining in its work the trade union principles of social inclusion and solidarity, welfare states and services of general interest, and workers' participation and collective bargaining. The balance between economic dynamism with a social dimension is part of the social contract entered into as part of the construction of the single market. However, linking economic and social progress - a core element of the European social model (European Commission 2005e) - nevertheless remains a challenge. The EU 25 is faced not only with a population that is living longer but also with a worrying decline in fertility rates, in some countries far below population replacement rates. Wages are under pressure, decent working hours are under threat and the continuing resistance to implementation of some social EU directives calls for mobilisation of all the bodies concerned.

The Benchmarking Working Europe 2006 provides detailed information on the following areas of particular relevance to the world of labour in the EU (data supplied in graph and table form accompanied by explanatory texts):