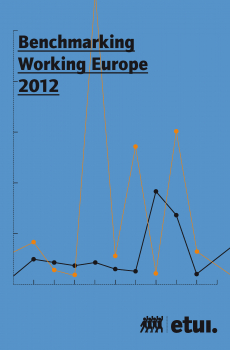 Since 2001, the ETUC and ETUI have produced Benchmarking Working Europe for the European Social Summit to draw attention to the state of working Europe. This publication aims to provide a genuine benchmarking exercise applied to the world of labour and social affairs grounded in effective labour and social rights. It establishes what progress – or lack of it – has taken place in selected areas of significance for social Europe and of importance to the trade unions.

This year’s edition of Benchmarking Working Europe focuses on what we see as one of the root causes of the great recession, namely the issue of inequalities going far beyond income inequality. Growing inequalities lead to growing feelings of injustice and lack of social cohesion both within and across countries, and at the same time, to a loss of human potential in its broadest sense. In this respect, this publication raises serious concerns as to the current direction of social and labour rights in the European Union.

Four main messages which we would like to highlight are:

1. Social inequality, in its many forms, is worsening in nearly all EU countries, and not only on account of the succession of financial, economic and debt crises.

2. Between the EU member states, the trend for the poorer economies to catch up with the richer ones, leading to greater convergence has been halted and even reversed.

3. The European discourse that new post-crisis growth will solve the temporary phenomenon of rising inequalities is fundamentally flawed. The link between growth and equality has snapped and the tide is no longer rising for all.

4. The political remedies must in future focus on a redistribution and ‘deconcentration’ of wealth.

On the website of Fundación Primero de Mayo and Fundación Francisco Largo Caballero you can find information on the Benchmarking 2012 in Spanish and download the summary in Spanish (also available below).

2. Inequality on the labour market

3. Education and inequality in Europe: a youth perspective

8. Do unions and worker representation bodies make for more or less inequality?

9. Working conditions to blame for wide gaps in workplace health