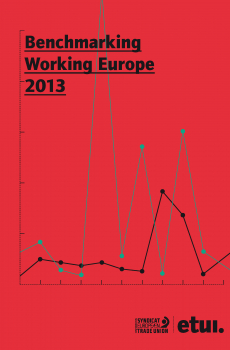 Widening economic and social gaps among EU member states, as well as among different groups and categories of citizens within society, are not only placing in jeopardy the future of Social Europe but threatening to undermine also the whole project of European integration. The post-2008 recession and debt crisis, helped along by EU leaders’ obstinate clinging to the failing remedies of fiscal austerity, have accelerated the disenchantment of millions of European citizens with the half-century-old project to build and consolidate a European Union. This is one of the most striking conclusions of the ETUI’s Benchmarking Working Europe report for 2013.

Benchmarking Working Europe is one of the ETUI’s regularly appearing flagship publications. Issued annually since 2002, the report offers an alternative perspective on EU developments. Using publicly accessible data, it reveals what is actually going on behind the EU social and economic affairs headlines. After last year’s issue focused on growing inequality in Europe, this year’s Benchmarking Working Europe report will demonstrate by means of hard-hitting graphs and cogent arguments that Europe is, rather than converging, actually drifting apart in numerous respects.

3. Austerity policies and the changing context of collective bargaining in Europe

5. The European divide in clean energy and fuel poverty