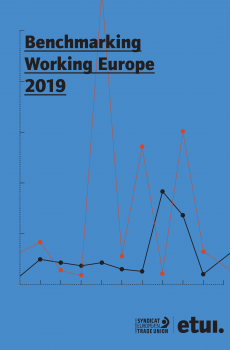 Benchmarking Working Europe, the annual stock-take of European economic, labour market and social affairs is published today by the European Trade Union Institute. This year’s report calls for action to stimulate investment, as well as reforms to fiscal rules to allow policy to play a more active role in stabilising economies and securing sustainable growth. Above all, inequality and insecurity must be tackled through reversing deregulation and reviving collective bargaining. Benchmarking also flags up the longer term challenges of the four ‘megatrends’ of climate and demographic change, digitalisation and globalisation. Published annually since 2001, Benchmarking Working Europe puts worker’s concerns firmly at the centre of its analysis and policy proposals. The four chapters analyse the areas of economic growth, labour market changes, wage developments and worker’s participation.

3. Wages and collective bargaining: time to deliver on the European Pillar of Social Rights

It has almost become a cliché to say that the Covid-19 pandemic has exacerbated pre-existing inequalities while also generating new ones. However, the following pages of this year’s Benchmarking Working Europe clearly reveal that, far from being a platitude, the nexus between the pandemic and rising inequalities is both increasingly measurable and... Find out more

→ www.benchmarking2020.eu A virus is haunting Europe. And it could strike again. This year’s 20th anniversary issue of our flagship publication Benchmarking Working Europe brings to a growing audience of trade unionists, industrial relations specialists and policymakers a simple warning: beside SARS-CoV-2, the virus that has caused the Covid-19... Find out more

This 2017 edition of Benchmarking working Europe focuses on the question 'overcoming cleavages across the EU?'. It analyses in four chapters and with the help of 58 visual graphs latest trends and outcomes of European policies in the areas of macro-economics, wages and collective bargaining, labour markets and, last but not least, social dialogue... Find out more

With this year’s chosen focus – ‘prepared for the future?’ – the new edition of Benchmarking working Europe analyses the state of working Europe with the aid of a multi-level and multi-dimensional set of indicators. This 2016 edition is intended as one contribution to an assessment of what the EU current policies have achieved, or above all what... Find out more

Published every year, the report analyses the state of working Europe explaining with the aid of statistics and graphs the main trends in terms of Europe’s macro-economic situation, its labour market development, the situation of wages and collective bargaining, and worker participation. The focus of this year’s Benchmarking report is on the... Find out more

The report Benchmarking Working Europe 2014 reviews the crisis and EU austerity policies in the last five years from the point of view of Europe's social agenda. The publication, written by the research team of the ETUI, offers an overview of the most important statistics on the EU’s macroeconomic situation, labour market developments, inequality... Find out more

Widening economic and social gaps among EU member states, as well as among different groups and categories of citizens within society, are not only placing in jeopardy the future of Social Europe but threatening to undermine also the whole project of European integration. The post-2008 recession and debt crisis, helped along by EU leaders’... Find out more

Since 2001, the ETUC and ETUI have produced Benchmarking Working Europe for the European Social Summit to draw attention to the state of working Europe. This publication aims to provide a genuine benchmarking exercise applied to the world of labour and social affairs grounded in effective labour and social rights. It establishes what progress – or... Find out more

Is the Europe 2020 strategy leading us, as it promises, towards smart, sustainable and inclusive growth? This is the main question addressed by this publication on the eve of this year’s Spring European Summit. The ETUC and ETUI offer a critical assessment of the strategy and its various components: will it be able to provide a framework for the... Find out more

This year's Benchmarking Working Europe report embarks upon a social stocktaking of the reaction to and impact of the financial, economic and social crisis as a means of feeding into the post-crisis and EU2020 debate. Among the questions addressed this year are the following:What were the macro-economic developments and policy responses? How has... Find out more

This year’s report provides an assessment of Lisbon Strategy. It asks whether the EU is really moving in the direction of knowledge-based growth, examines whether the EU has witnessed the creation of more and better jobs and considers whether the Union is succeeding in attaining greater social cohesion. The report highlights:The discrepancy between... Find out more

Since the launch of the Lisbon Strategy, the ETUC together with the ETUI-REHS has produced an annual Benchmarking publication for the European Social Summit. Its aim is to establish what progress has been made in selected areas of importance to workers and which are of crucial significance for a Social Europe. This year’s report tackles the issue... Find out more