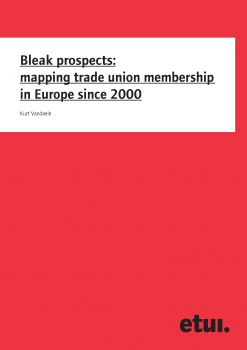 This report details shifts in trade union membership and density in 32 European countries since 2000, with a particular focus on the age structure within trade unions. The report uncovers substantial variations in unionisation rates, with the least unionised countries in the 2000s having largely stayed at the bottom of the ‘unionisation league’ in the 2010s and countries with higher incidences maintaining their positions further up. Overall, however, membership and density rates are declining in most countries, particularly Central and Eastern Europe, and they are also ‘greying’. With the loss in membership going hand in hand with a decrease in revenues, it remains to be seen how and to what extent trade unions will address the membership and generational challenges.