Building the European Federation of Public Service Unions: the history of EPSU (1978-2016) 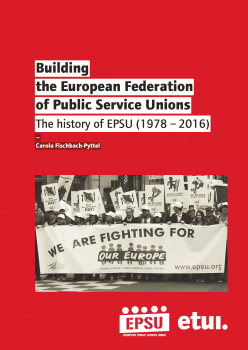 The European Federation of Public Service Unions will celebrate its 40th anniversary in 2018. It is better known as ‘EPSU’ (the ‘European Public Services Union’), a change of name made in November 2015 that represents both the organisation’s mission statement and a key future ambition.

This book retraces the development of EPSU, beginning with its early days as the European Public Services Committee (EPSC). The EPSC was set up as an ETUC liaison committee encompassing two organisations. It soon became obvious that this ‘marriage of convenience’ between the organisations involved was a mismatch, and it came to an end in 1994 through a decision by the EPSC Presidium which was then formalised at the fifth General Assembly in Vienna in 1996. The organisation was from then on to be called the European Federation of Public Service Unions (EPSU).

The book also looks at the difficult development of the sectoral social dialogue in the public services sector and describes the problems that had to be overcome in this process.

A constant challenge in EPSU’s work has been the various waves of public service liberalisation, ranging from public procurement and the Services Directive to the European energy market and, recently, the negotiation of various international trade deals. All these issues raise questions about the power relations that determine the policymaking of EU institutions.

The fact that labour inspection bodies are independent does not necessarily mean they are neutral, which would in fact be unrealistic in practice. Such inspection has relied from the very start on the unions’ daily work within companies in order to ensure its effectiveness. there is now an overriding need for this link to be strengthened. Valeria... Find out more

The 17th edition of Social policy in the European Union: state of play reports on recent EU and national social policymaking, with contributions from leading scholars pointing to a ‘crisis’, the best word to characterize 2015. Tensions in the EU reached an unprecedented level: the migration crisis showed the EU the limits of its decision-making... Find out more

Labour inspection services across Europe have been going through an existential crisis. With few exceptions, workforces have been reduced while inspectors have been assigned more extensive duties. Faced with these transformations in the world of work, the sheer scale of their mission can leave labour inspectors feeling powerless. Find out more

This joint ETUC-ETUI publication takes stock of the 40-years history of the European Trade Union Confederation. On the basis of numerous unpublished documents, this book tells the story of the challenges, successes and failures of the ETUC over these fourty years. It combines a scientific and historical approach with a political one, the aim being... Find out more

Towards a European recognition of public services at last? The potential impact of the Lisbon Treaty

This issue of the Policy Brief - European Social Policy highlights the potential positive impact that the Lisbon Treaty could have on public services in Europe. Section 1 of this contribution by Séverine Picard, Legal Adviser of the ETUC, provides an overview of the current legal situation, revealing the conflictual relationship between EU internal... Find out more

Privatisation and liberalisation of public services in Europe