Collective social rights under the strain of monetary union

Can Article 28 of the EU Charter of Fundamental Rights offer protection? 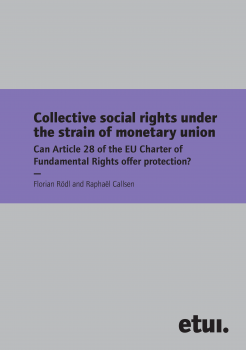 This report examines in depth the legality of the measures taken by the European Union, alongside the European Central Bank (ECB) and the International Monetary Fund (IMF), in the wake of the financial and debt crisis. Beginning with a factual presentation of the European Union’s post-crisis agenda, which has focused on a flexible, productivity-based wage policy, the authors then establish in which areas the EU’s demands have interfered with existing collective bargaining systems, i.e. with autonomy in collective bargaining. These measures are assessed in the light of the Charter of Fundamental Rights of the European Union, with specific regard to the right of collective bargaining enshrined in Article 28 of the Charter. In some instances, this interference will consequently prove to be unlawful, in particular owing to the violation of the principle of proportionality. Where this is the case, various options for judicial remedy are suggested.By placing the post-crisis policy squarely within the context of collective labour law and assessing its legality, the report establishes standards that should be observed not only in scholarly debate but also in the setting of the European Union’s future political agenda.

The report was published first within the Book series of Hugo-Sinzheimer-Institut Frankfurt in 2015. Due to the Europe-wide relevance of the subject, the ETUI decided to translate and publish this English translation in its own publication series.

This policy brief demonstrates how the EU's financial and economic crisis has been used to attack European collective labour law. Amendments to the Lisbon Treaty, changes in the EU's economic governance and austerity measures have led to drastic national labour law reforms which undermine fundamental social rights.The role of trade unions and... Find out more

The economic consequences of the European monetary union: social and democratic?

Since the outbreak of the financial, economic and budgetary crisis, we have been witnessing a potentially radical change in the mode of governance of the euro zone. Amid the state of emergency decreed by the financial markets, a series of innovations – institutional, political, procedural, etc. – have been implemented by the European and national... Find out more