Divisive integration. The triumph of failed ideas in Europe - revisited 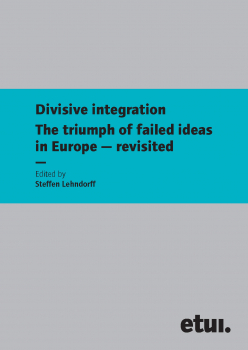 This book is a follow-up to the ETUI 2012 volume 'The triumph of failed ideas'. The focus of the book is the weight attributed to the different economic and social development paths in ten individual EU countries, and their interaction with the austerity regime established at EU level which in fact is deepening the crisis rather than paving ways out of it.

The most dangerous implication of this policy approach is, according to this study, that it is driving countries apart - misleadingly in the name of 'Europe', hence the title of the book 'divisive integration'.

The main message of the book is that a gradual recovery is possible only if there is a change of course in individual countries that then triggers reactions in the policies of other countries and perturbations at the EU level. However, these changes in individual countries is no longer feasible without a green light or at least toleration from the level of the European institutions.

The original German version of this book was published by VSA Verlag, Germany, in 2014.

Josep Banyuls and Albert Recio: A crisis inside the crisis: Spain under a conservative neoliberalism

Maria Karamessini: Greece as an international test-case: economic adjustment through a Troika/state-induced depression and social catastrophe

James Wickham: Irish paradoxes: the bursting of the bubbles and the curious survival of social cohesion

Steffen Lehndorff: Model or liability? The new career of the ‘German model’

Florence Jany-Catrice and Michel Lallement: Conversion through inequality: the transformation of the French social model

Christoph Hermann and Jörg Flecker: Mastering the crisis but not the future: the Austrian model in the financial and economic crisis

Damian Grimshaw and Jill Rubery: Neoliberalism 2.0: crisis and austerity in the UK

András Tóth: Coming to the end of the via dolorosa? The rise of selective economic nationalism in Hungary

Dominique Anxo: The Swedish model in times of crisis: decline or resilience?

A triumph of failed ideas: European models of capitalism in the crisis

The current crisis in Europe is being labelled, in mainstream media and politics, as a ‘public debt crisis’. The present book draws a markedly different picture. What is happening now is rooted, in a variety of different ways, in the destabilisation of national models of capitalism due to the predominance of neoliberalism since the demise of the... Find out more