European Labour Law and the EU Charter of Fundamental Rights 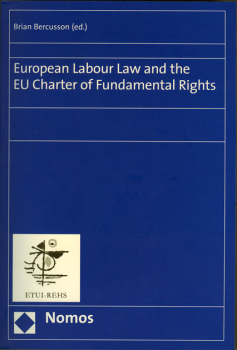 What role will the EU Charter of Fundamental Rights play in the future for labour law in the European Union Member States? How could it affect industrial relations in these states? These are crucial questions to which a group of eminent European labour law professors and researchers seek to offer some answers in their new book European Labour Law and the EU Charter of Fundamental Rights.

To recall the story behind the Charter: in December 2000, this text was not enshrined as an integral part of the new EU Nice treaty, but was merely 'proclaimed', to the disappointment of many, so that its legal status remained ambiguous. The draft future Treaty establishing a Constitution for Europe is clearer, insofar as it incorporates the Charter as its Part II, thereby giving it a binding character - but nobody knows whether, or when, this Treaty-Constitution will actually see the light of day and, if it does, in what shape. Yet now, as the discussions about a future EU constitution are regaining momentum, the European Court of Justice has also had its word on the role of the Charter. It has declared that "...the principal aim of the Charter... is... to reaffirm rights" which are legally binding due to their provenance from other sources recognised by EU law (Case 540/03, European Parliament v. Council, decided 27 June 2006).

The thus strengthened Charter includes core labour law and industrial relations provisions, covering matters such as freedom of association, collective bargaining and collective action, information and consultation within the undertaking, fair and just working conditions and protection in the event of unjustified dismissal. The book European Labour Law and the EU Charter of Fundamental Rightsis a detailed commentary on the provisions of the Charter which guarantee these and other fundamental rights that are binding upon the EU institutions and the Member States. The commentary throws light on the potential of the EU Charter to shape the future labour law of Europe, an understanding of which is important for labour lawyers and industrial relations professionals, as well as for academics and policy makers in the Member States and in the EU institutions.