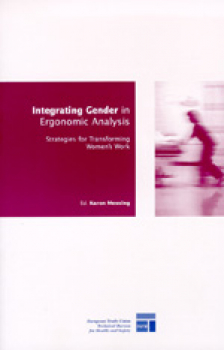 Scientists, employers, decision makers and even women themselves seem to have difficulty in coming to grips with women’s work-related health problems. In part, this stems from traditional perceptions of women's work. The widespread belief that women’s jobs are safe compared to men’s, means that women’s health problems are dismissed as an inability to do the job, or “all in the mind”. This has held back efforts to improve their occupational health. Prolonged standing which lead to circulatory disorders, or repetitive movements which cause micro-strains, seem much less dangerous than the risk of falling from scaffolding or saw-cut injuries.

For a number of years past, the Montreal-based CINBIOSE centre has been conducting research to make visible and gain recognition for aspects of women’s work which are bad for their physical or mental health. This research stems from the concerns and needs voiced by women workers themselves. Most of it is conducted in partnership with the three main Quebec trade unions. Through their scientific research and commitment to making workplaces healthy and safe, the team aims to shed light on what has so far remained invisible.

We thought this was a lead which should be brought to European attention. It shows the immense potential contribution of action-oriented research to improving equal opportunities and working conditions.