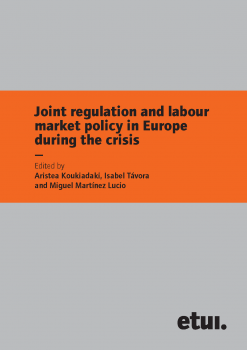 This book presents the results of a research project which sought to understand how the crisis-driven labour policy measures in the EU Member States most affected by the crisis translated into changes in collective bargaining in manufacturing. Drawing on empirical evidence consisting of interviews with policy officials and industrial relations actors as well as of company case studies in seven countries (Greece, Ireland, Italy, Portugal, Romania, Slovenia and Spain) the book illustrates how the recent policy measures have resulted in a crisis of collective bargaining at different levels, including not only national but also sectoral and company levels.

In most cases, the structure, process, content and outcomes of collective bargaining have been undermined calling into question the capacity of the industrial relations actors to respond and regulate terms and conditions of employment in the post-crisis period. However, there is also evidence of institutional and organisational resilience and reconfiguration in the process of responding to and accommodating the labour policy measures, most notably in industrial relations systems that were characterized by strong bargaining arrangements in the pre-crisis period.

Aristea Koukiadaki and Chara Kokkinou: Chapter 2 - The Greek system of collective bargaining in (the) crisis

Eugene Hickland and Tony Dundon: Chapter 3 - Reform of joint regulation and labour market policy during the current crisis: the manufacturing sector in the Republic of Ireland

Sabrina Colombo and Ida Regalia: Chapter 4 - The reform and impact of joint regulation and labour market policy during the current crisis: Italy

Isabel Távora and Pilar González: Chapter 5 - The reform The reform of joint regulation and labour market policy during the current crisis: national report on Portugal

Aurora Trif: Chapter 6 - Social dialogue during the economic crisis: the survival of collective bargaining in the manufacturing sector in Romania

Miroslav Stanojevi? and Aleksandra Kanjuo Mr?ela: Chapter 7 - Social dialogue during the economic crisis: The impact of industrial relations reforms on collective bargaining in the manufacturing sector in Slovenia

Key messages of this publication (IT)

This working paper examines the impact of fiscal austerity on EU labour market policies. Using a case study approach, it examines: the extent of change in unemployment benefit levels and policies; the effect of this on groups of workers; and whether the logic of activation policies has shifted. Overall, the broad direction of policy has not altered... Find out more

Labour market policies in the era of pervasive austerity: a European perspective

This book investigates the changing patterns of labour market and unemployment policies in EU member states during the period since fiscal austerity took hold in 2010 during the deepest postwar recession in Europe. Looking at the big European picture, do we see a convergence or a divergence in labour market and unemployment policy trends and... Find out more

Since 2008, Europe has been affected by the deepest crisis since the 1930s. This has had a farreaching impact on the economic and social situation of millions of European workers. The most obvious impact has been the dramatic increase in mass unemployment. Today, there are more than 26 million unemployed people in the European Union (EU). It has... Find out more

This working paper by Jochen Clasen and Daniel Clegg, of the University of Edinburgh, together with Jon Kvist of the University of Southern Denmark, examines the nature of impact of the economic and political challenges engendered by the “Great Recession” on labour market policy reforms in Europe. The authors thus consider the question of whether... Find out more

This paper by senior ETUI researchers Béla Galgóczi and Janine Leschke looks at recent trends in labour migration from new EU member states to the EU15, with a focus on the impact of the crisis on intra-EU labour mobility. Based on data from the European Labour Force Survey, the findings of the study contradict expectations, previously expressed in... Find out more