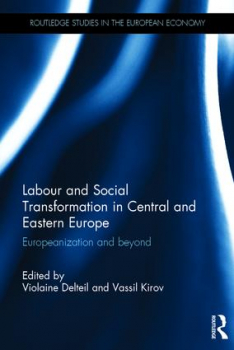 Over a quarter of a century after the fall of the Berlin Wall and 10 years after their accession to the European Union (EU), Central and Eastern Europe Countries (CEECs) still show marked differences with the rest of Europe in the fields of labour, work and industrial relations. This book presents a detailed and original analysis of labour and social transformations in the CEECs.

By examining a wide range of countries in Central Europe, Labour and Social Transformation in Central and Eastern Europe offers a comprehensive and contrasting view of labour developments in Central and Eastern Europe. Chapters explore three related issues. The first deals with the understanding of the complex process of Europeanization applied in the sphere of labour, employment and industrial relations. The second issue refers to the attempt to link the Europeanization approach with an analysis mobilizing the theoretical concept of "dependent capitalism(s)". The third issue refers to the cumulative trends of labour weakening and labour awakening that has emerged, in particular in the aftermath of the crisis beginning in 2007-2008.

Transfer stimulates dialogue between the European trade union movement and the academic and research community. It contributes research findings on issues of strategic relevance for trade unions, in particular with regard to developments at the European level. Transferpublishes original peer-reviewed research on issues such as new developments in... Find out more

Brian Bercusson was a leading European labour law academic and a true defender of European trade union and workers' rights. His critical analysis of European and national labour law developments have always been a source of precious support and a source of inspiration for the ETUI and the ETUC. As a legacy for future generations but also as the... Find out more

In this, the fourth ETUI Policy Brief in 2009, the impact of the economic and financial crisis on Central and Eastern Europe is examined. Five years after EU enlargement, the new member states have been hit hard, contrary to initial hopes that their previous strong growth would make them immune. Bela Galgoczi, Senior researcher at the ETUI, shows... Find out more