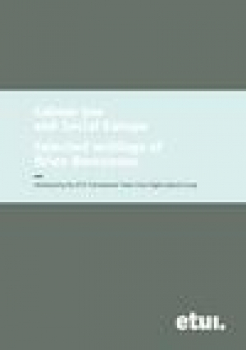 Brian Bercusson was a leading European labour law academic and a true defender of European trade union and workers' rights. His critical analysis of European and national labour law developments have always been a source of precious support and a source of inspiration for the ETUI and the ETUC. As a legacy for future generations but also as the expression of the trade union’s heartfelt gratitude for his unstinting attachment to defending workers’ rights, the ETUI Experts Group has gathered a selection of the most important writings of Brian Bercusson on Labour Law and Social Europe. Ten chapters, each introduced by a member of the Experts Group, cover essential labour law issues which Brian Bercusson explored in his research: Institutional and legal framework, Collective industrial relations, the employment relationship, Workers’ participation, Economic freedom v. fundamental social rights, Discrimination and equality in employment, Health and Safety in respect of working time, conceptualization of European labour law, Globalisation and the future of the trade union movement.

The economic and financial crisis and collective labour law in Europe

The current economic and financial crisis erupted several years ago. Its effects impacted deeply upon society, in which legal rules and social patterns have developed to enable the establishment of civilisation, justice and peace. Over time it has become more and more obvious that policy, financial and economic actors have adopted austerity... Find out more