Macroeconomic imbalances and comparative advantages in the Euro Area 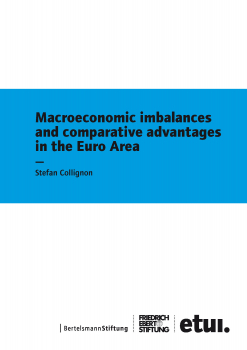 The emergence of macroeconomic imbalances among EU member states is often seen as a major underlying factor of the recent European debt crisis. In order to identify and tackle these imbalances, the European authorities established, in 2011, a new surveillance tool incorporating rules to prevent future imbalances and labelled the Excessive Imbalance Procedure (EIP).

Stefan Collignon argues that the premises of the Excessive Imbalance Procedure are in fact wrong, and its implementation therefore misguided, in that they take for granted the policy framework of the nation state whereas the Euro Area economy is, in reality, integrated into a single market with a single currency, such that so-called ‘foreign’ debt is, effectively, debt to other residents in the Euro Area.

The author demonstrates, furthermore, that strict adherence to the EIP could, in conjunction with other new economic governance instruments, entail devastating consequences for peripheral countries in the European Union.

Following his observation that current indicators used by the Commission fail to provide a correct or accurate assessment of imbalances in the Euro Area, the author devises a new ‘Competitive Index’, calculated as the difference between actual and equilibrium unit labour costs, which he recommends as an alternative and better indicator in the context of the Alert Mechanism Reports to be issued by the European Commission in the future.