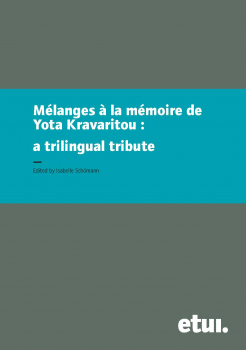 In October 2008 Yota Kravaritou died aged 64. A well-known and highly reputed labour law professor and researcher on European, national and comparative labour law, social policy and gender issues, Yota Kravaritou, from the outset of her career, was driven by the fervent belief, supported by research findings, that women deserve much greater recognition in society and that labour law should provide for this recognition in the workplace. Her scientific commitment to the cause of gender balance in Europe was coupled with her dedication to the promotion of a Social Europe, a task in which she believed that the European Trade Union movement had a crucial role to play.

This volume represents an expression of heartfelt gratitude for her unrelenting commitment to the cause of women’s and workers’ rights in democratic societies. With wide-ranging contributions in three languages (English, French and Italian), the Mélanges constitute a rich and ambitious forum on the role of law, especially labour law, in society and the impact of Yota Kravaritou’s thinking and writings on developments in Europe in the fields of labour law and beyond. The volume, far from being a farewell, constitutes a dialogue with future generations on her legacy for a better, fairer, gender-balanced world.