Prevention at the workplace

The impact of Community Directives on preventive systems in Sweden, Finland, Norway, Austria and Switzerland 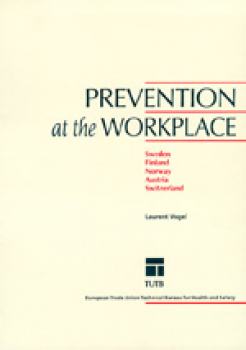 This book follows on from 1994 study on how preventive provision was organised in the European Union of 12 Member States. The author applies the same analytical approach to Austria, Finland and Sweden as well as to Switzerland and Norway. Because the national situations encountered were so radically different, the different effects of transposition could be assessed in three sets of circumstances.

The first - the three Nordic countries studied - provided a key source of inspiration for Community legislation and met with few real legal difficulties. But these countries offered a way of gauging the Directives' adaptability to changing political and economic situations.

In Austria, the Directives were transplanted into a system very much focused on its origins in occupational risk insurance and a clear demarcation between private sector workers and public servants. In fact, the only major failing encountered in the Austrian transposition was the exclusion of the civil service.

Switzerland bore all the hallmarks of the Austrian system, plus its own specific industrial relations system and far more right-of-centre labour law lacking any serious guarantees of workers' collective rights. The fact that the Directives were transposed on a voluntary basis allows inherent areas of agreement and battle lines within the Directives to be examined in a specific national context.