Social developments in the European Union 2010 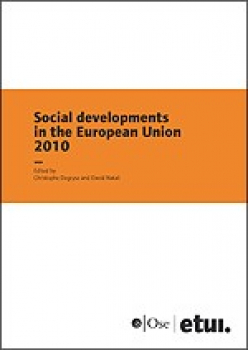 2010 was a critical year for the European Union (EU) in at least three major respects. First of all, many EU countries started showing signs of increased financial stress, while the eurozone began to be affected by a true debt crisis extending well beyond the highly publicised case of Greece. Secondly, the European Union strove to achieve renewal through its first steps to implement the Lisbon Treaty that had come into force on 1 December 2009. The third reason why 2010 represented a turning point for the EU is that the ten-year Lisbon Strategy, launched by the European Council in March 2000 as a framework for EU socio-economic policy coordination, formally reached its end in June 2010 when EU leaders adopted the new Europe 2020 Strategy. All of these developments will have deep and long-lasting effects on social policy at both national and supra-national level.

This 2010 edition of Social developments in the European Union examines the ways in which the EU has tackled the main challenges related to the fiscal crisis, the first steps towards implementation of the Lisbon Treaty and the launch of the EU2020 Strategy. The volume sheds light on a number of aspects including the risks for the European social model and European integration project, the state of the debate on revision of the Stability and Growth Pact, the impact of the economic and financial crisis on pensions, the new ‘EU employment policy roadmap’ and, more generally, the tensions, risks and opportunities generated by Europe 2020.

Chapter 1 - The crisis and the European social model - George Irvin