Social developments in the European Union 2012 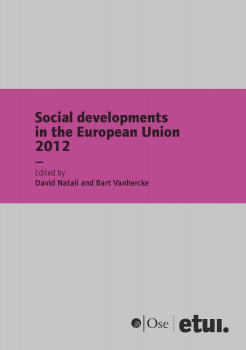 The year 2012 has seen new developments in the EU’s economic crisis and renewed attempts to address its main causes. The European institutions have intensified their programme of promoting austere economic governance, while the political and institutional debates on democratic legitimacy and the effectiveness of the EU have intensified. In such a context, the ‘social dimension’ of Europe is clearly on the defensive with little progress towards more sustainable forms of growth. Almost undetected, however, the processes governing social policy in the context of the Europe 2020 strategy are slowly maturing and are being taken more seriously by key actors. This could prove to be highly consequential in future.

The 2012 edition of Social developments in the European Union finds evidence of pending problems and new challenges. Discussions focus on both old tensions (double dip recessions and persistent economic turmoil in many Member States) and new questions about the EU strategy, which has resulted in a growing divide between Northern and Southern Europe and increased discontent among the general public, but done little to promote growth-friendly investment.

This volume focuses on alternative measures to save the EU. Taking as a starting point the growing criticism of budget austerity, especially from international organisations such as the ILO and IMF, contributors propose new strategies for tackling the crisis. At the top of the agenda is the need for the EU to allow Northern countries to adopt more growth-oriented budgetary policies to increase aggregate demand. This could help those countries hardest hit by recession to finally exit the crisis and in so doing save the European project.

Schulten and Müller: A new European interventionism? The impact of the new European economic governance on wages and collective bargaining

Alexander H. Trechsel and Claudius Wagemann: The EU in 2012: political and institutional tensions

Georg Feigl, Sven Hergovich and Miriam Rehm: Beyond GDP: can we re-focus the debate?

Bart Vanhercke Under the radar?: EU social policy in times of austerity

Dalila Ghailani: Vicissitudes of the social case law of the Court of Justice in times of recession

P. De Grauwe: From financial to social and political risks in the eurozone