Social developments in the European Union 2013 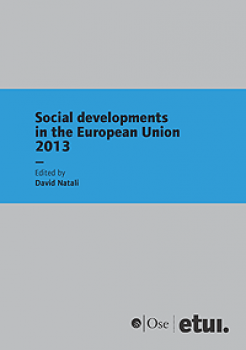 The European Union has gone through a crucial period marked by growing anti-EU sentiments and the difficult implementation of its largely renewed socio-economic governance. After years of in-depth innovations and the hope of reinvigorating the E(M)U social dimension, European institutions have engaged in a lively debate on how to exit the recession and relaunch the integration project. While most Member States have continued to pursue punitive austerity programmes – at a time when 27 million Europeans are unemployed and a quarter of the EU population is at risk of poverty – most stakeholders (namely the trade union movement) and policymakers agree on the need for an EU-driven growth strategy.

This 2013 edition of Social developments in the European Union provides key insights from analysts and scholars. Through the critical assessment of the EU economic governance of the last few years, contributors have set guidelines for a reinforced EU social protection and investment plan. The proposals for a pan-European unemployment insurance scheme and an EU minimum income scheme are analysed together with a renewed focus on the gender dimension of European social policies. Beyond economic and social governance, this volume critically reviews national reforms of labour market policies. While the state of the European economy is still gloomy, the institutional and policy reforms proposed here represent an opportunity to unveil a new path for Europe.

Gender equality, from the Treaty of Rome to the quota debate: between myth and reality, Dalila Ghailani