Social policy in the European Union 1999-2019: the long and winding road 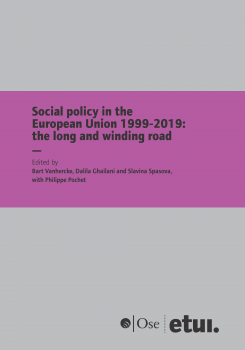 This volume is the 20th anniversary edition of Social policy in the EU: state of play. Coordinated by Cécile Barbier and Philippe Pochet, the first edition covered the year 1999 and was published as a collaborative project between the European Social Observatory (OSE) and the European Trade Union Institute (ETUI) in 2000.

This anniversary edition looks back at the main developments in EU social policymaking over the past two decades. Key questions addressed in this volume include:

The editors provide also an analytical chronology of the main developments of the EU’s social dimension over the past twenty years and summarise the key messages put across by the authors of the book’s chapters regarding key EU social policy areas. The chapter also discusses some of the recent debates on the EU’s social agenda under the new von der Leyen European Commission, while providing policy recommendations drawing on the analyses presented in this book.

Despite many optimistic statements by the EU leaders, social policy remains a ‘nice to have’ (if and when the economic and political context allows for it), not a ‘must have’.

Philippe Pochet: Chapter 1 - Twenty years of the publication ‘Social policy in the European Union’: what have we learned?

Sacha Garben: Chapter 3 - Balancing fundamental social and economic rights in the EU: in search of a better method

Jean-Paul Tricart: Chapter 4 - Once upon a time there was the European social dialogue

Bart Vanhercke : Chapter 5 - From the Lisbon strategy to the European Pillar of Social Rights: the many lives of the Social Open Method of Coordination

Roberta Guerrina: Chapter 6 - From Amsterdam to Lisbon and beyond: reflections on twenty years of gender