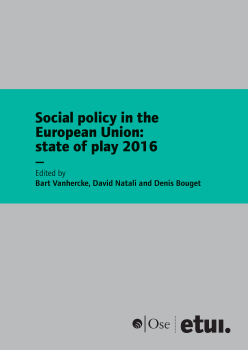 The 17th edition of Social policy in the European Union: state of play reports on recent EU and national social policymaking, with contributions from leading scholars pointing to a ‘crisis’, the best word to characterize 2015. Tensions in the EU reached an unprecedented level: the migration crisis showed the EU the limits of its decision-making capacity, economic weakness continued to prevail, austerity policies and the badly handled socioeconomic Greek crisis turned populations against the EU – and then came the Brexit vote.

This book argues that the centrifugal pressures within the EU and the EMU can be handled through a process of managed integration and disintegration. It maintains that the EU’s renewed focus on long-term unemployment is biased towards a ‘jobs first’ approach, contributing to the EU’s Janus-faced approach to the social dimension. It demonstrates that the austerity dogma has led to an erosion of social rights and makes a plea in favour of going ‘back to basics’ with regard to worker’s protection. Reflection and down-to-earth debate on the long-term integration of both EU migrants and refugees is required.

The political reality of 2015 demonstrates that the EU project has been too narrowly focused on reciprocity, instead of solidarity. The harsh reality is that the European project can no longer be considered irreversible. The EU’s core values must therefore be reaffirmed with a view to creating a new common sense of purpose, including a more explicit commitment to equitable growth via a European Social Union.

Sergio Fabbrini: Beyond disintegration: political and institutional prospects of the European Union

Sotiria Theodoropoulou: What solidarity in the Eurozone after the Greek crisis of 2015?

Aída Ponce Del Castillo: Occupational safety and health in the EU: back to basics

David Natali: Taking the bull by the horns: differentiation within the EU to save it?