Social policy in the European Union: state of play 2018 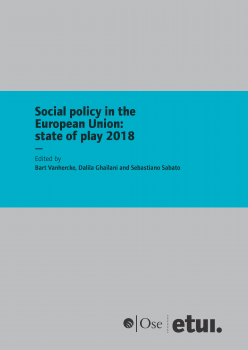 This year’s stock-take of Social Europe - Social Policy in the European Union: state of play 2018 - reports on recent EU and national social policymaking with a focus on the game-changing advent of the European Pillar of Social Rights (EPSR) one year ago. A dominant feature of this annual review of social policy in the European Union is the way in which the EPSR has slowly but steadily started to influence EU policymaking, well before it was politically endorsed in November 2017. The Pillar’s new ‘rights-based social investmentapproach’ is at present leaving its mark on the 2018 European Semester and has triggered two batches of legislation: the ‘Pillar Package’ and the ‘Social Fairness Package’. These developments are critically visited in the 19th edition of this edited volume, looking at both their positive and negative outcomes as well as their potential to serve as steps towards a fully-fledged ‘European Social Union’ (ESU).

Maurizio Ferrera: Chapter 1 - The European Social Union: how to piece it together

Sebastiano Sabato and Francesco Corti: Chapter 3 - ‘The times they are a-changin’?’ The European pillar of social rights from debates to reality check

Stefan Clauwaert: Chapter 4 - A new legislative agenda for the EU: putting meat on the bones after all?

Slavina Spasova and Mathijn Wilkens: Chapter 5 - The social situation of the self-employed in Europe: labour market issues and social protection