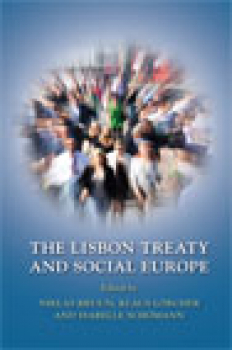 The first part of the book on the general framework looks – at a time of financial crisis – for new foundations for Europe’s social market economy. it questions the balance between fundamental social rights and economic freedoms, analyses the role of the now binding Charter of Fundamental Rights, maps the potential impact of the horizontal clauses on social policy and addresses the possibilities for social partners to enlarge their role in labour law and industrial relations.

The second part, on the social framework of the Treaty, focuses on the development of the Union’s competences. In it the authors evaluate the consequences of the new general framework on social competences, analyse the evolution of the principle of subsidiarity and its impact in the new Treaty, look at the coordination of economic policies in the light of fundamental rights, and analyse the adoption in the Treaty of a new architecture for services of general interest.

The Lisbon Treaty: a more social Europe at last?

This ETUI Policy Brief on social policy in Europe looks into the social dimension of the recently ratified Lisbon Treaty. Although it was widely expected that the Treaty will strengthen social Europe, the author demonstrates that it only partly lives up to these expectations and is very much lacking in ambition in this respect. Find out more

After Lisbon - Social Europe at the crossroads?

This paper is the result of critical discussions held in the framework of the SALTSA project on the post-2010 continuation of the Lisbon process. The general conclusion is that Europe will continue to need, in the future, a common strategy for growth and sustainable development which builds on the experiences of the ‘old’ Lisbon strategy. That is... Find out more

Towards a European recognition of public services at last? The potential impact of the Lisbon Treaty

This issue of the Policy Brief - European Social Policy highlights the potential positive impact that the Lisbon Treaty could have on public services in Europe. Section 1 of this contribution by Séverine Picard, Legal Adviser of the ETUC, provides an overview of the current legal situation, revealing the conflictual relationship between EU internal... Find out more