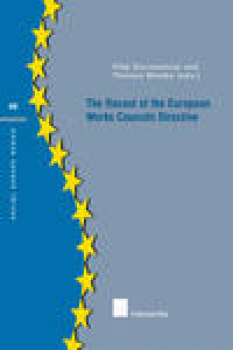 The first part of the book examines the background and some of the loopholes of the EWC Directive 94/45/EC. The analysis of the background conducted from a conceptual, a historical, and legislative angles shows the many loopholes inherent in the EWC Directive. What the practical result of these legislative shortcomings has been is shown in the chapter analysing EU court of justice and national courts’ judgments with regard to EWC case law.

The second part does not endeavour a systematic analysis of the Recast Directive. It rather gathers selected essays which have been written by distinguished scholars as well as by experts who combine a profound theoretical knowledge of law with experience in its practical application. Some of the essays have a topical character focusing on individual aspects of the new Recast Directive 2009/38/EC, specific improvements of the Recast Directive, and future prospects for EWCs. Other authors have tackled the subject matter in a more comprehensive manner, though they have done so from a specific perspective (e.g. the issue of effectiveness, the issue of actors).

ETUI researcher Romuald Jagodzinski gives an overview of the background of the ETUI project on EWC case law coordinated by himself and one of the editors of the book – Filip Dorssemont. In a further contribution Jagodzinski analyses the events of the ten months since the opening of the official recast procedure in 2008 until its final outcome giving an overview of the European social partners’ positions and those of other institutional EU actors.