Towards a just transition: coal, cars and the world of work 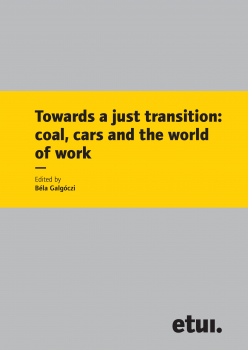 The role of trade unions and social dialogue is key in demonstrating the major differences between coal-based energy generation and the automobile industry. This book presents two faces of a just transition towards a net-zero carbon economy by drawing lessons from these two carbon-intensive sectors. The authors regard just transition not as an abstract concept, but as a real practice in real workplaces. While decarbonisation itself is a common objective, particular transitions take place in work environments that are themselves determined by the state of the capital-labour relationship, with inherent conflicts of interest, during the transition process.

The case studies presented in this book highlight the major differences between these two sectors in the nature and magnitude of the challenge, how transition practices are applied and what role the actors play.

Aleksander Szpor: Chapter 1 - The changing role of coal in the Polish economy

Stefan Gärtner: Chapter 5 - An attempt at preventive action in the transformation of coal-mining regions in Germany

Anne-Gaëlle Lefeuvre and ?tefan Guga: Chapter 6 - Troubled waters ahead: what’s next for the European automobile industry and jobs?