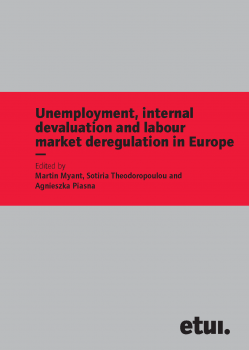 Unemployment rates in the EU rose after the economic crisis of 2008, passing 10% in 2012, but with big variations between countries. The worst afflicted had been subject to so-called policies of internal devaluation, aimed at curing unemployment by reducing wage costs. This book provides a comparative study of countries that to varying degrees followed that road (Greece, Spain, Portugal, Ireland) set against others that did not (Germany, UK, Poland).

The analysis points to three main conclusions. The first is that unemployment was not caused by excessive wages. There were issues of competitiveness in some countries but they related to the absence of high-quality export sectors. The second is that internal devaluation did reduce balance of payments current account deficits, but overwhelmingly by reducing living standards and hence imports. It did not trigger higher exports, although in several countries they increased for completely different reasons. The third is that internal devaluation has led to more rather than less unemployment and to less rather than more growth. The book points the way to alternative, and more effective, solutions based on improved competitiveness and more employment following spending and investment in infrastructure, education and research, areas that have suffered in the interests of internal devaluation policies.

Tom A. McDonnell and Rory O’Farrell: Chapter 2 - Fall of the Irish house of cards