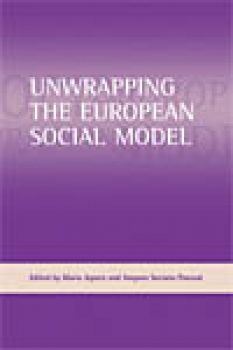 "Current concerns with achieving the objectives of the LisbonStrategy together with the recent enlargement and widespread debate on the adoption of a new EU constitution have contributed to renewed interest in the sustainability of the European Social Model. This book offers an up-to-date, wide-ranging and detailed analysis of its impact on member states."
Nick Adnett, Faculty of Business and Law, Staffordshire University

The notion of the European Social Model (ESM) has been one of the fastest growing in European political and academic discourse in recent years. It is conventionally used to describe the European experience of simultaneously promoting sustainable economic growth and social cohesion. However, the concept has suffered from a lack of clear definition. And where definitions have been found in the literature, they do not necessarily converge.

This book presents the outcome of a project coordinated by the European Trade Union Institute in which experts from different countries and social scientific disciplines (sociology, political science and economics) were invited to reflect on both the meaning and political status of the concept of the ESM. In addition to analysing the ambiguities and multiple meanings attributed to the concept, the authors unpick the underlying assumptions and make use of a new approach - the ESM as political project - with which European countries can build consensus and share a common understanding.

Offering a new analytical framework and with new empirical evidence, Unwrapping the European Social Model is essential reading for all those involved in European social policy research, education, policy and practice.

In this paper the extent to which the EU is actively disseminating a social model is considered, through the lens of EU enlargement and... Find out more

Towards a European Social Model

European integration has since the mid-fifties been principally economic in nature. Market creating policy is now very much conducted at... Find out more