Variations on a theme? The implementation of the EWC Recast Directive 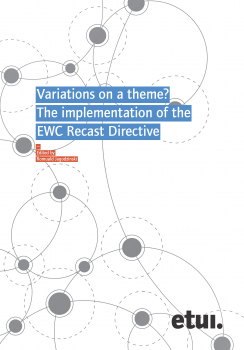 Since 1994, the EU has established mechanisms for information and consultation procedures for workers in transnational companies (European Works Councils Directive 94/45/EC). In 2009, the EWC Directive was reviewed and amended (Recast EWC Directive 2009/38/EC). The year 2016 will see the formal conclusion of a new evaluation procedure designed to ascertain whether the improvements of 2009 have had any impact on the EWC's conditions of operation and whether any further amendements should be considered.

This book assesses in detail the ways in which key improvements brought about by the 2009 EWC Recast Directive have been implemented in national legislation. The authors of the book have looked into the national transposition legislation of the 31 countries of the European Economic Area. The findings are very relevant for EU policy-making and for practitioners to deal with differing national legislative regimes.

Sylvaine Laulom: Chapter 2 - Procedure for the establishment and adaptation of a European Works Council or an information and consultation procedure

Jan Cremers and Pascale Lorber: Chapter 3 - Transposition of provisions of the Recast Directive on the functioning of the European Works Council

The present brochure which has been published for the ETUC Congress in Athens contains pre-selected data from the forthcoming ETUI... Find out more

The first part of the book examines the background and some of the loopholes of the EWC Directive 94/45/EC. The analysis of the background... Find out more

The implementation of the Machinery Directive

Publication date: 2003The EU's Machinery Directive has now been in force for ten years, but we still know little enough about how it is... Find out more