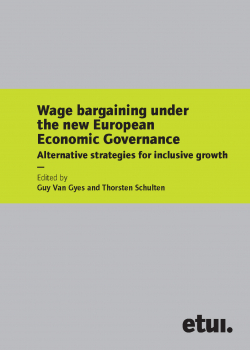 Within the framework of the new European economic governance, neoliberal views on wages have further increased in prominence and have steered various reforms of collective bargaining rules and practices. As the crisis in Europe came to be largely interpreted as a crisis of competitiveness, wages were seen as the core adjustment variable for ‘internal devaluation’, the claim being that competitiveness could be restored through a reduction of labour costs.

This book proposes an alternative view according to which wage developments need to be strengthened through a Europe-wide coordinated reconstruction of collective bargaining as a precondition for more sustainable and more inclusive growth in Europe. It contains major research findings from the CAWIE2 – Collectively Agreed Wages in Europe – project, conducted in 2014–2015 for the purpose of discussing and debating the currently dominant policy perspectives on collectively-bargained wage systems under the new European economic governance.

A German version of this book is available via VSA Verlag Germany.

Jesús Cruces, Ignacio Álvarez, Francisco Trillo and Salvo Leonardi: Chapter 3 - Impact of the euro crisis on wages and collective bargaining in southern Europe - a comparison of Italy, Portugal and Spain

Szilvia Borbély and László Neumann: Chapter 5 - Similarities and diversity in the development of wages and collective bargaining in central and eastern European countries - a comparison of Hungary, Slovakia and the Czech Republic

Lewis Emery: Chapter 6 - Multi-employer bargaining in the UK - does it have a future?

Maarten Keune: Chapter 8 - Less governance capacity and more inequality: the effects of the assault on collective bargaining in the EU

Odile Chagny and Michel Husson: Chapter 9 - Looking for an 'optimal wage regime' for the euro zone

Thorsten Schulten, Line Eldring and Reinhard Naumann: Chapter 11 - The role of extension for the strength and stability of collective bargaining in Europe

Publication Alert for key messages (IT)

This edited volume maps different trajectories in national collective bargaining systems in Europe since the Great Recession. Since the... Find out more

From growth to well-being: a new paradigm for EU economic governance

This policy brief criticizes the European Economic Governance system for being too narrowly focused on economic growth and competitiveness... Find out more

Since 2008, Europe has been affected by the deepest crisis since the 1930s. This has had a farreaching impact on the economic and social... Find out more

For more than two years, the European Union has been endeavouring to cope with an unprecedented public debt crisis. Under pressure from the... Find out more

Minimum wages in Europe under austerity

In this Policy Brief Thorsten Schulten – researcher at the WSI in the Hans-Böckler Foundation and widely acknowledged as one of Europe’s... Find out more

Minimum wages in Europe: new debates against the background of economic crisis

The minimum wage is a standard and generally accepted tool of labour market regulation in most European countries. Since the start of the... Find out more

Wage policy in Austria and the Netherlands under EMU

This paper analyses how wage policy in Austria and the Netherlands was affected by economic and monetary union (EMU). The paper concludes... Find out more

Wages and wage bargaining in Europe

This volume presents an analysis of wage developments and wage bargaining practices since the mid-1990s in 17 European countries. The... Find out more