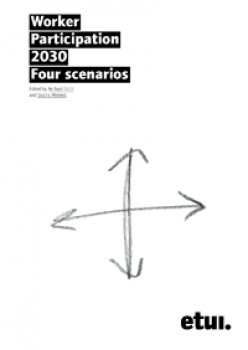 This new publication, edited jointly by ETUI researcher Michael Stollt and Sascha Meinert from the Berlin-based Institute for Prospective Analysis (IPA), sets itself an audacious task: casting a long look forward into the future, namely the year 2030. Four alternative scenarios explore the long-term prospects and changing contexts of worker participation, in its various forms, in Europe. The stories incorporate broad developments in society, as well as the strategies and actions of people and organisations, first and foremost the actors involved in worker participation.

Scenarios are not intended to predict the future, but to provide the reader with a ‘future map’ of what might be. They are also not intended to tell people what they should or should not do. Instead, they help us to conceive alternatives and be prepared for several different futures and to deal with the risks and opportunities lying ahead of us. Just as a regular compass is very useful for taking one’s bearings in space, scenarios enable one to take one’s bearings in time. Working with scenarios also makes clear that the future is not yet written and that it is worth trying to actively shape it.

The exploration of the future upon which this publication embarks – a quite atypical research area for the ETUI – comes with an unusual layout and illustrations which seek to express the different dynamics of each scenario. The attractive hard copy version of this book has been produced with spiral binding, cardboard cover and colour illustrations.

This publication is available in English, German and in French (see below).

With the Lisbon strategy of 2000, Europe set itself ambitious economic and political goals. Within the framework of a ten-year strategy, the European Council wants to make the EU into the most dynamic and competitive economic area in the world. High social standards underpinned by the European social model and ecological sustainability were... Find out more