Employment, job quality and labour relations in Europe’s public sector since the crisis 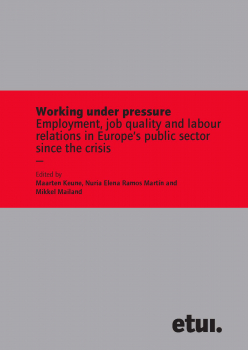 For many years, in most European countries, the public sector has been under pressure to reduce expenditure and increase efficiency. Long-term pressures on the public sector, and especially the recent austerity drives following from the crisis, have led to reforms and cuts in public budgets with serious negative effects on the European Social Model, on the quality of public services and on social outcomes, including health and inequality.

This book analyses the evolution of employment, job quality and labour relations in the public sector since the 2008 crisis in nine EU Member States: Denmark, France, Germany, the Netherlands, Italy, Slovakia, Spain, Czech Republic, and the UK. It focuses on three sub-sectors: primary education, health care and municipalities. The authors show that the public sector reforms of the past few decades, as well as the more recent crisis-related austerity policies, have had important consequences for the number and quality of jobs across the nine countries. Public sector workers have frequently had to shoulder the burden of budgetary pressures through declining employment levels and job quality, including stagnating or declining (real) wages and the intensification and ‘extensification’ of work. Declines in the number of jobs and job quality have been strongest in the countries where the crisis has been felt the deepest, in particular Italy and Spain. However, in the last few years, there is a moderate recovery in employment and/or job quality, particularly in healthcare and primary education.

The authors have identified several broad trends in public sector labour relations. One is the turn of governments towards greater unilateralism in the initial crisis years. The second is the emergence of new industrial relations actors. Following the dissatisfaction of public sector workers and the limited success of the established trade unions to respond to this dissatisfaction, a variety of new unions, social movements, ad hoc pressure groups and other organisations have emerged. Thirdly, there has been a widespread increase in strikes, protests, campaigns and other forms of industrial action by public sector workers. Finally, the erosion of the quality of public services has become a central issue in the demands of trade unions and new social actors. They now consistently argue that good job quality for public sector employees is essential to guaranteeing and enhancing the quality of public services.

Sabina Stiller and Klara Boonstra: Chapter 6 - Bargaining and quality of work under increasing strain: the case of the Netherlands

Marta Kahancová and Mária Sedláková: Chapter 7 - Erosion of bargaining in the world of vital actors: industrial relations in the aftermath of public sector reforms in Slovakia

This edited volume maps different trajectories in national collective bargaining systems in Europe since the Great Recession. Since the start of the crisis in 2008, wage setting and collective bargaining systems in many EU countries have been under tremendous pressure to follow the logic of companies and market imperatives. Fostering... Find out more

Are employee participation rights under pressure? Trends at national and EU level

Just a few weeks before the launch of a new Action Plan on Company Law and Corporate Governance by Internal Market Commissioner Michel Barnier, this Policy brief seeks to review the stakeholder model of corporate governance that prevails in Europe by looking at the evolution of board-level employee representation rights in the light of national and... Find out more

Cleaning up: workers under pressure

The contract cleaning industry is a microcosm of the worst health impacts of changing working conditions over the last thirty years. Find out more