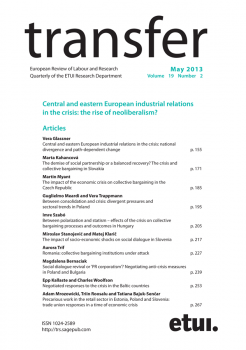 The current global economic and financial crisis that hit Europe in autumn 2008 and is currently bringing the euro area to the brink of collapse affected industrial relations in EU Member States in different ways. While in central western and northern Europe trade unions, employer organizations and the state played a crucial role in drafting and implementing measures to maintain and promote employment during the recession via collective bargaining and social dialogue, social partners in the central and eastern European (CEE) EU Member States (hereafter EU-10) were less able to mitigate the negative social consequences of the crisis. Thus, while in a number of western European countries the crisis resulted in a strengthening of collective bargaining and social partnership, in most of the EU-10 industrial relations – already decentralized, disorganized and fragmented – were further weakened.

This working paper presents the results of the ETUI Internet and Platform Work Survey conducted in Bulgaria, Hungary, Latvia, Poland and Slovakia in 2018-2019. The objective is to map the extent of digital labour in central and eastern Europe (CEE) based on the analysis of two types of online sources for generating income: internet work; and its... Find out more

This working paper maps out developments of industrial relations in Central-Eastern Europe (CEE) during the period 2008-2014. It looks at wage trends and public sector austerity measures, collective bargaining practices, social dialogue performance and the incidence of strikes and protests.The paper concludes that the crisis posed tough challenges... Find out more

European enlargement and the economic crisis: impact and lasting effects

This working paper by Rebecca Zahn of the University of Stirling looks at the effects of the economic crisis on the enlarged European Union and the European Social Model.Starting from an analysis of the well-known Viking and Laval decisions of the European Court of Justice from 2007 and 2008, the author of the report sees increasing tensions... Find out more

After the crisis: towards a sustainable growth model

The devastating economic and financial crisis has revealed the limitations of financial capitalism and opened up a window of opportunity to propose and implement progressive reforms. Against this background the European Trade Union Institute has brought together critical and progressive academics and researchers from Europe and the United States to... Find out more