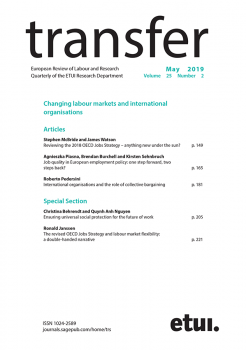 The focus of this special issue is how international organisations whose remit includes jobs and employment have reassessed their analysis and policy recommendations on fostering well-functioning labour markets. Over the past five years the issue of ‘the future of work’ has dominated most such international institutions’ work programmes. The perceived need to engage with the changing structures of the labour market and to reassess policy recommendations and reform proposals is mainly the fruit of changes arising from the progressive digitalisation of the economy, predictions of extensive automation and the rise of the so-called ‘platform economy’. Various analyses have predicted massive job destruction, profound structural change in work organisation and the rise of a labour market based on tasks rather than jobs. While this digitalisation megatrend has dominated the discussion and analysis of the labour market, it is by no means the only megatrend that is driving change. Globalisation and its redistribution of work, climate change and demographic change are also of the utmost importance. The changes in the labour market are perceived as generating risks and challenges by increasing the hybridisation of labour market statuses. Other important factors include increased income inequality in many countries, diversity of needs and increased individualisation of risks.