What future for transnational value chains 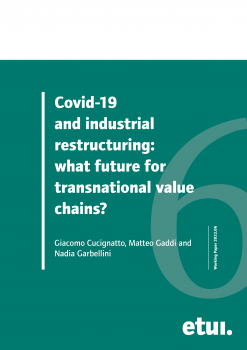 The economic and health crisis triggered by the Covid‑19 pandemic leaves the European Union facing the steepest decline in production and employment since the Second World War, on top of economic fundamentals that are already fragile as a result of the disastrous effects of the double fall associated with the great financial crisis and the sovereign debt crisis.

This paper shows that, in the absence of an industrial policy aimed at changing the structure of the EU’s productive system, the transformation of global demand currently taking place will mostly benefit the Asian economy with China increasingly assuming industrial supremacy to the detriment of the US. The EU, in its turn, is going to accumulate growing gaps in terms of productive capacity within different supply chains – with the partial exception of Germany.

In order to achieve a transition that is not only environmental but also social, a European industrial policy is needed for the creation and public management of at least four industrial sectors, broadly defined: semiconductors – whose production is triggered by final demand for an extremely broad range of commodities, in particular TLC devices and personal computers; hydrogen electrolysers, solar panels and wind turbines; TLC equipment such as personal computers, smartphones, tablets – and in general connectivity devices; and public transport equipment.

Covid-19 and the world of work in Europe

Editorial David Natali This issue of Transfer addresses some of the main analytical and substantive questions stemming from the pandemic that first hit Europe in February 2020. The magnitude of the crisis, in terms of both its impact on health and well-being, and its consequences for economic prospects, is enormous. The massive spread of the virus... Find out more

With work a key vector of Covid‑19 transmission, this report examines why it is critical that occupational health and safety measures take centre stage in mitigation policies. Workers in sectors declared essential by state authorities have been mandated to continue working in physical settings during the pandemic. Several such sectors involve many... Find out more

Repercussions of the Covid-19 pandemic

Editorial Béla Galgóczi This first issue of the SEER Journal for Labour and Social Affairs in Eastern Europe for 2021 focuses on the repercussions of the Covid-19 pandemic across the region, with a view also to the role of the EU. When the SEER devoted an issue to the pandemic a year ago, the region was comparatively less affected than western... Find out more

Creative labour in the era of Covid-19

This working paper identifies some key areas of policy intervention for advancing socially sustainable and fair solutions for freelancers working in the creative industries, who are among those have suffered the most from the economic fallout of the Covid-19 pandemic. In particular, the authors focus on those who work entirely on their own account... Find out more

Teleworking in the aftermath of the Covid-19 pandemic

Policy implications Policymakers should address the risk of the gradual disappearance of the physical workplace, and with it of the notion of choice in relation to remote working. As segments of the workforce return to the workplace, employers should ensure the continuity of countermeasures to buffer isolation. It will be essential for employers to... Find out more

Pensions in the age of Covid-19

Pension policy is not safe from the potentially dramatic consequences of the pandemic. But in terms of pension politics, the pandemic also represents a window of opportunity to rethink the political debate on the future reform agenda. The present policy brief sheds light on the short- and long-term consequences of Covid-19 for pensions in Europe... Find out more

This paper analyses the economic policy-making in the first phase of the epidemic in five Central Europe countries, Austria, Czechia, Hungary, Slovakia and Slovenia, whose economic structure is characterized by strong export orientation. The focus is on the participatory character of the governments’ COVID-19 packages, on their design, and targets... Find out more

This issue of the SEER Journal for Labour and Social Affairs in Eastern Europe for 2020 focuses on EU-western Balkans relations at the time of the Covid-19 pandemic, with a particular insights to the policy approaches in Croatia and Turkey. In terms of the number of cases per capita, western Balkans countries have been affected by the pandemic to a... Find out more

Essential but unprotected: highly mobile workers in the EU during the Covid-19 pandemic

The Covid-19 pandemic has shown that highly mobile workers who frequently move either within or in and out of the European Union (EU) are irreplaceable during a public health crisis. Nevertheless, they often remain the least protected and most vulnerable. Measures introduced to protect workers in standard employment relationships during a public... Find out more

Covid-19 contact-tracing apps: how to prevent privacy from becoming the next victim

Contact-tracing apps to combat the Covid-19 pandemic have increasingly been mentioned as useful tools to accompany and contribute to a return to normality despite the many ethical and legal questions they raise. The pressure exerted by business circles and lobbies to restart and ‘save the economy’ has been intense. What started as a public health... Find out more