Blockchain in the world of work: hype or hope? 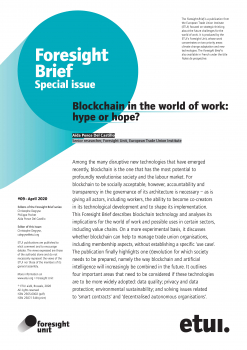 Among the many disruptive new technologies that have emerged recently, blockchain is the one that has the most potential to profoundly revolutionise society and the labour market. For
blockchain to be socially acceptable, however, accountability and transparency in the governance of its architecture is necessary – as is giving all actors, including workers, the ability to become co-creators in its technological development and to shape its implementation.

This Foresight Brief describes blockchain technology and analyses its implications for the world of work and possible uses in certain sectors, including value chains. On a more experimental basis, it discusses whether blockchain can help to manage trade union organisations, including membership aspects, without establishing a specific ‘use case’. The publication finally highlights one (r)evolution for which society needs to be prepared, namely the way blockchain and artificial intelligence will increasingly be combined in the future. It outlines four important areas that need to be considered if these technologies are to be more widely adopted: data quality; privacy and data protection; environmental sustainability; and solving issues related
to ‘smart contracts’ and ‘decentralised autonomous organisations’.