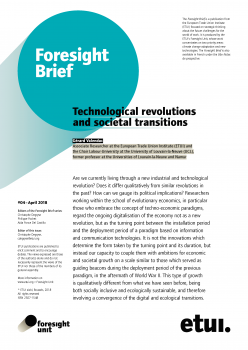 Are we currently living through a new industrial and technological revolution? Does it differ qualitatively from similar revolutions in the past? How can we gauge its political implications? Researchers working within the school of evolutionary economics, in particular those who embrace the concept of techno-economic paradigms, regard the ongoing digitalisation of the economy not as a new revolution, but as the turning point between the installation period and the deployment period of a paradigm based on information and communication technologies. It is not the innovations which determine the form taken by the turning point and its duration, but instead our capacity to couple them with ambitions for economic and societal growth on a scale similar to those which served as guiding beacons during the deployment period of the previous paradigm, in the aftermath of World War II. This type of growth is qualitatively different from what we have seen before, being both socially inclusive and ecologically sustainable, and therefore involving a convergence of the digital and ecological transitions.