The future of the automotive sector 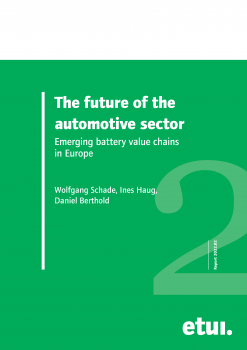 This battery study analyses the ramping-up of lithium-ion battery cell production in Europe. It outlines lithium-ion battery technology, the value chain, location factors, the innovation system and the employment effects. The report aims to identify the strengths, weaknesses, opportunities and threats of Europe as a location and its global role in battery cell production. A location matrix identifies attractive European locations for battery cell production plants and compares Europe’s competitiveness with the main players USA, China, South Korea and Japan. European demand scenarios are calculated and Europe is expected to meet its demand until 2030, and even build up export capacities, provided that all the projects that have been announced can be successfully implemented. Then it will also be able to increase its share in global production at the expense of China. An analysis of the technical innovation system identifies the interplay between the actors and the framework conditions which will stimulate battery cell production in Europe. Analysis of the employment effects paints a diverse picture of job losses and job creation alongside a high demand for retraining.

The future of the automotive sector-Emerging battery value chains in Europe_2022.pdf