Endocrine disruptors: an occupational risk in need of recognition

Endocrine disruptors: an occupational risk in need of recognition 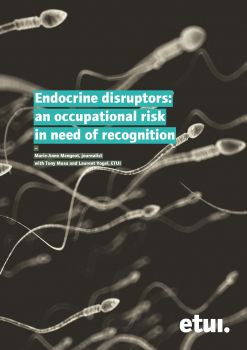 This guide, which received the 2018 Prescrire Prize, is intended for representatives (in particular those on health and safety committees) of workers potentially exposed to endocrine disruptors at work. It takes stock of research findings on the health consequences of workers being exposed to chemical substances with potentially harmful effects on the endocrine system.

Its aim is to raise the awareness of union officials and political decision-makers to this largely unrecognised public and workplace health risk. A further aim is to draw attention to the gaps in European legislation on the prevention of this type of workplace risk. As such, it contributes to the 2016-2017 “Cancer and Work” campaign organized by European trade unions.

On 4 October 2018 the guide received the 2018 Prescrire Prize in Paris. Read more here