Individual working lives and the capability approach. An overview across Europe 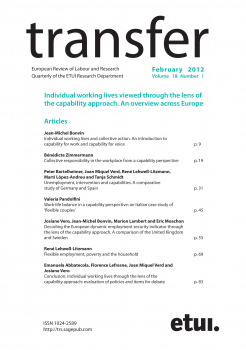 Changes in labour markets since the end of the economic crisis in the 1970s have transformed what was a relatively stable employment model into a much more ‘flexible’ one. In this new scenario, many jobs are unstable and atypical (temporary, part-time, jobs with changing work schedules and so on) and labour market segmentation has increased. As a consequence, workers’ trajectories have shifted from the linearity and stability characteristic of the Fordist production model to a situation in which working lives are subjected to a high degree of discontinuity and variability. The current economic crisis is exacerbating some of these adverse characteristics of contemporary working lives, and also producing new forms of poverty and risks of social exclusion, such as the working poor.