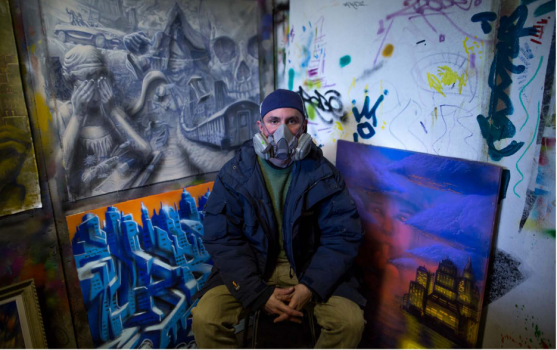 Journalist Jade Serrano and photographer Sadak Souici met French “taggers” Swen MC 93, Xare Graff, 2Rode, Hydrane and TresDos, and found out about the risks they face in their work: harmful products, danger on the streets at night, and a sometimes uncertain relationship with the law.

Some people regard graffiti taggers as vandals, while others see them as fully fledged artists, but there’s no denying the fact that this genre of street art has revolutionised the contemporary art scene since its rise to prominence in the 1990s. A canvas by the French graffiti artist KAWS, for example, sold for 14.8 million dollars at Sotheby’s Auction House on 1 April 2019. The number of artists whose work is valued by the market is still small, of course, but this change in status is shaking up a subculture whose members derive their identity from creating informal art outside the law.

Between the 1970s and the 2000s, aerosol spray cans contained a significant proportion of substances that were classified as toxic, including solvents derived from propane and methane. This can have tragic consequences, as shown by the case of American artist Kase2, born Jeff Brown, whose aerosol spray cans brought him fame but who died from lung cancer in 2011 at the age of 52. The French National Authority for Health has since made several recommendations for their use, including protective gear such as gloves, long sleeves, goggles and a filter mask.

The health risks became very real to the graffiti artist 2Rode when he completed his first tag indoors: "I painted my first interior mural without a face mask, and I really suffered – crushing headaches, fluorescent snot, unbearable coughing fits. It didn’t take me long to shell out for protective gear." Solvents are ingested into the body via three pathways: the respiratory system, the skin and the eyes, and they can also attack the nervous system, resulting in dizziness and severe headaches. Exposure over a prolonged period can lead to disorientation, drowsiness or even coma. Even the solvent-free aerosol spray cans currently on the market are not 100% safe – although they are said to pose no real risk to health, they nevertheless contain alcohol and glycol ethers, collectively known to the scientific community as volatile or- ganic compounds (VOCs). Several research studies published by Grenoble University’s Faculty of Medicine in 2000 identified these notorious VOCs as a factor in the development of asthma, allergies and pulmonary conditions. In the words of the 30-year-old Hydrane: "Sometimes I suffer from terrible coughing fits that wake me up in the middle of the night." Yet she confesses that she wears a protective mask only when she’s working indoors. Like the other young artists of her generation, she finds it hard to turn her back on the rules of the street.

At the same time that art galleries were suddenly discovering a taste for graffiti on canvas in the 1990s, groups of taggers who were happy to view themselves as vandals were emerging in the Île-de-France region around Paris. Xare Graff was one of them, joining the TVA crew in 1996 and tagging his first train carriages with them. The brightest and best of the Parisian vandal scene met every Saturday at Buzenval Metro Station, and these gatherings have since become legendary: "There would be as many as 100 of us, and we tagged everywhere – and I mean every- where, in the carriages, on the metro, along every tunnel." It was not just the public that noticed the exploits of the Parisian metro vandals; they also came to the attention of the Railways Department of the French police. Inspector Jean-Christophe Merle headed up the Investigative Division until 2007, and his team stumbled upon this urban art movement purely by chance. In his words, "We were called in as back-up for a drugs raid that was taking place in Yvelines, the 78th Department of Paris, and we happened upon a fanzine with a number of images of vandal graffiti. That was the point at which we started to take an interest in what was going on." The Railways Department identified 150 taggers, all of whom were questioned: "Some ended up in prison as a result of the court proceedings held in 2005, but it was by no means the majority of taggers, and none of them were put behind bars for graffiti-related crimes – they were locked up for common-law cases of violence. The others only had to pay fines."

Chilean-born artist TresDos, who arrived in France in the first decade of this century, belongs to the graffiti crew known as ODV. The art he produces nowadays in France has its roots in the years of informal training he underwent in Chile, especially in the city of Valparaiso, which is famous around the world for its urban art. In his own words, "I’ve made the choice not to sell my work to art galleries, that’s not what I think graffiti should be about. Not everyone is lucky enough to be able to go and see an exhibition, and doing my art in full view of the public feels like the right choice for me." Yet his relationship with these public spaces is somewhat ambiguous, since he willingly spends hours of hard work on his creations despite being conscious of the risk he is taking. He recalls one particular time in the middle of the night: "I was tagging with the Mexican artist Banks at Parmentier station when we were arrested by a couple of plain-clothes police officers. That was the first and last time I’ve ever been arrested, but all they did was seize our spray cans and let us go – which was not what I was expecting."

A woman in a man’s world

The street is not a safe space for male graffiti artists, and even less so for female ones. Hydrane, one of the few women in the heavily male-dominated world of graffiti artists, finds that her male counterparts happily accept her as one of them, belying the scene’s misogynistic image: "I like the idea of breaking down barriers and being one of the few women in the men’s world of graffiti. I like proving that I can play their game, and I’m proud to call lots of other taggers my friends. At the same time, though, I have to admit that it’s not a particularly safe environment for a woman." She’s grown tired of always asking acquaintances to act as "bodyguards", but their absence has left her vulnerable to aggression from some men: "Once I was working on a mural next to the Saint-Denis Canal when a man started talking to me. He was aggressive and insulted me, and I felt really uncomfortable. The next morning, when I went back to get a shot of my mural in daylight, the wall on which I had been working had been whited out. In my book, that’s plain and simple sabotage, and you get to a point where tagging outdoors just seems like a bad idea all round." She laughs. "But I just keep on keeping on."•