From minimum to living wages – lessons from different European practices 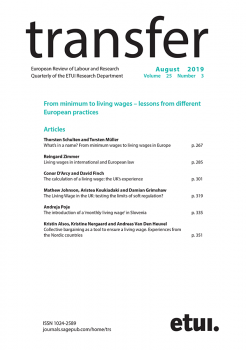 The Conference recognizes the solemn obligation of the International Labour Organisation to further among the nations of the world programmes which will achieve…policies in regard to wages and earnings, hours and other conditions of work calculated to ensure a just share of the fruits of progress to all, and a minimum living wage to all employed and in need of such protection.

Although the above call for a minimum living wage was made more than 70 years ago, it has lost nothing of its relevance and urgency. It also illustrates that, historically, the two concepts of minimum and living wages have often been used synonymously. It is only more recently, under the hegemony of neoliberalism, that the two concepts have diverged. Minimum wages are increasingly understood as a basic wage floor, whereas living wages refer to pay that is above the subsistence level and enables workers and their families to sustain a decent living standard and to participate in social and cultural life.

The European minimum wage on the doorstep

The European Commission published a consultation document with a view to take legislative action to establish fair minimum wages in Europe. In this policy brief, the researchers argue for a pragmatic approach of taking the ‘in-work-poverty-wage’ threshold of 60 per cent of the national full-time gross median wage as the reference to assess the... Find out more

This policy brief examines the concept of a ‘Living Wage’ and its place in European political discourse. A Living wage is commonly understood as a needs-based estimate of the funds necessary for provision of basic goods for a worker and his/her family. Although the idea has seen a resurgence following the launch of the European Pillar of social... Find out more

Back on the agenda: a European minimum wage standard

This policy brief provides a brief but systematic overview of the different minimum wage regimes currently found in the EU as a basis for formulating some potential contours of a European minimum wage policy. Find out more

Minimum wages continue to stir controversial policy debates. This study contributes to a better understanding of minimum wages by providing a solid empirical assessment of minimum wage policies and their socio-economic consequences for a range of European countries. In addition to qualitative differences between minimum wage systems, the report... Find out more

Minimum wages in Europe under austerity

In this Policy Brief Thorsten Schulten – researcher at the WSI in the Hans-Böckler Foundation and widely acknowledged as one of Europe’s foremost expert on the subject – analyses recent trends in minimum wages across Europe in the light of the economic crisis. In most European countries, workers earning the minimum wage suffered losses – in some... Find out more

This volume presents, for the first time, a comprehensive analysis of national minimum wage systems in Europe and the USA. The study, coordinated by the Economic and Social Sciences Institute (WSI) in the Hans Böckler Foundation, contains studies of countries such as Great Britain, Ireland, the Benelux countries, France, Spain, the states of... Find out more