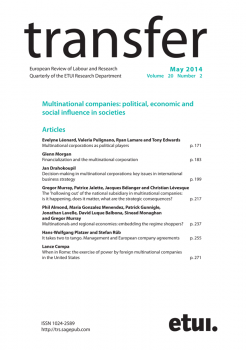 The articles in this special issue of Transfer report and reflect upon a specific aspect of the activities of transnational corporations: their role as political players. Power and politics often come together as the raw truth of any organization. This is particularly true for multinational enterprises where the term ‘political’ is used to refer specifically to the ‘power’ exerted in such transnational corporations. This exercise of power can be considered from different perspectives, ranging from internal governance, via internal power and politics, to the influence that such companies have on existing institutions regulating employment and industrial relations. In a more general sense, it also involves the macro-politics of the transnational social space that multinationals create around them, covering for example trade and transfer pricing, and the setting of prices for goods and services within the enterprise but also across national borders.

Multi-national corporations (MNCs) are constantly undergoing a process of standardisation and reorganisation (S&R), which is fuelled by the rapid development of information technology (IT). These developments require an in-depth and systematic inquiry as they have serious ramifications for labour and workers’ participation across Europe. Moreover... Find out more