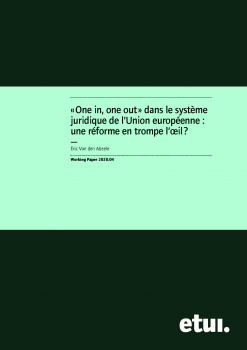 The issue of burden and cost reduction, both regulatory and administrative, has become a leitmotif that regularly appears at the table of the European Council.

In this respect, the "one in, one out" regulatory compensation system, which consists of replacing any new cost linked to a legislative initiative with the removal of an existing one, is a powerful political symbol if we judge the positive reception it has received from around ten Member States. By highlighting this accounting method, which has no precise economic content, the promoters of "one in, one out" believe they have a martingale that will enable them to strip the acquis communautaire of its share of "unnecessary" obligations and costs.

At a time when the European Union (EU) needs standards providing legal certainty and predictability, as well as a level playing field with its trading partners, the idea that the law is an obstacle to the smooth running of business is coming back strongly. The issue of "one in, one out" regulatory compensation will be one of the priorities of Angela Merkel's government during the German EU Presidency.

This publication looks in detail at this regulatory clearing system as it will determine the role the EU will play in the coming years.