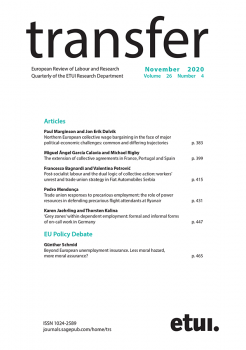 This new number of the ‘open’ issue of Transfer contains five articles alongside a sixth, launching a new section of this fourth annual issue of Transfer, entitled ‘EU Policy Debate’. The five articles cover the developments in the industrial relations systems of several European countries, with common features in terms of their analysis. Two of the articles focus more closely on the question of collective bargaining and its various forms from a comparative viewpoint which, very aptly, comprises, on the one hand, wage bargaining in the countries of northern Europe, and, on the other, the development of the mechanism for extending collective agreements in three countries of the south, including France, which, it may be agreed, encompasses both types of welfare state. Two other articles analyse, in two different countries (Serbia and Portugal), how trade unions manage disputes and try to find resources to advance the interests of employees. It may be inferred from these four articles that, although there are common trends, the modes of action of the parties involved, particularly the trade unions, are influenced by their national history. The last article echoes the article on how Portuguese unions grasped the issue of Ryanair’s precarisation policy, in discussing how the practices leading to precarious employment relationships in Germany, beyond platform-based workers and the world of digital technology with its entourage of (bogus) self-employed workers, also affect workers with the contractual status of employees. The opening article in the section devoted to EU policy debate argues in favour of pooling efforts to tackle unemployment in Europe and to adapt the organisation of working time to the challenges raised by the inevitable transitions that occur during the course of the lives of European citizens, irrespective of their employment status. read more

The extension of collective agreements in France, Portugal and Spain