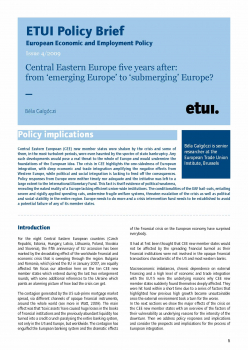 In this, the fourth ETUI Policy Brief in 2009, the impact of the economic and financial crisis on Central and Eastern Europe is examined. Five years after EU enlargement, the new member states have been hit hard, contrary to initial hopes that their previous strong growth would make them immune. Bela Galgoczi, Senior researcher at the ETUI, shows that policy responses from Europe have been neither timely nor adequate and the initiative was left to a large extent to the International Monetary Fund.