Dependency ratios and demographic change. The labour market as a key element 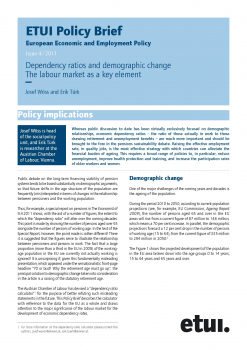 Whether it is in the context of austerity policies, the EU2020 strategy, or the exigencies of competitiveness and globalisation, sooner or later the discussion comes round to ageing, pensions and retirement ages. In this, the fourth ETUI Policy Brief European Economic and Employment Policy of 2011, Josef Wöss and Erik Türk, both from the Austrian Chamber of Labour, Vienna, examine these demographic issues. They emphasise the importance of looking, not as is usually done, at the ratio of elderly persons to those of working age (demographic dependency) but rather at the number of benefit recipients (pensioners and the unemployed) compared with the number of people actually working (economic dependency). The change in focus has two main consequences. First, the expected rise in dependency ratios is considerably less dramatic. Second, a whole range of variables comes into play as a means to slow the rise in economic dependency, whereas the only way to change demographic dependency is to raise the statutory retirement age. In particular, the crucial importance of reducing both unemployment and inactivity among the working age population is revealed.