How has the crisis affected social legislation in Europe? 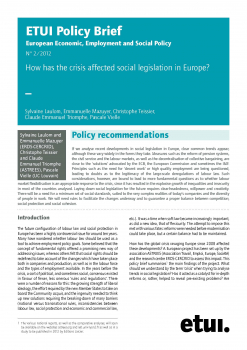 This Policy Brief summarises the main findings of a European project set up by the association ASTREES and the research centre ERDS-CERCRID to assess the impact of the global crisis ravaging Europe since 2008 on recent developments in social legislation in Europe. The study shows that the initial ‘financial’ stage of the crisis did not produce major changes. With a few exceptions, the Member States and the EU itself ‘made do’ with existing measures. The second stage however – Euro crisis, public debt crisis – promises far more sweeping changes, many of which will represent a step backwards in terms of social policy. The authors argue, that if this situation continues, it will call into question not just the European social model, but also a key factor in our global performance.