Inequality, poverty and the crisis in Greece 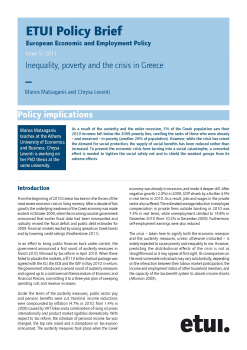 The whole of Europe, indeed much of the world, is anxiously watching as the Greek drama unfolds. Discussions of the various austerity measures are usually couched in terms of whether they can actually be implemented by the government, or whether they will be sufficient to achieve given budgetary targets. In this ETUI Policy Brief Manos Matsaganis and Chrysa Leventi analyse an issue that has achieved much less attention: the distributional and social consequences of the austerity packages for the Greek population. They find amongst other things that, as a result of the austerity and the wider recession, 5% of the Greek population saw their 2010 incomes fall below the 2009 poverty line, swelling the ranks of those who were already in poverty (another 20% of population). They conclude that to prevent the economic crisis from turning into a social catastrophe, a concerted effort is needed to tighten the social safety net and to shield the weakest groups from its adverse effects.

Inequality and the crisis

In this ETUI Policy Brief Rory O’Farrell looks at some of the mechanisms linking inequality and the health of the economy and reviews the evidence on how various inequality measures have changed during the crisis. He warns about measures in the context of austerity programmes that will serve to raise inequality, casting doubt on the foundations of... Find out more